Crews attending a welcome function tonight hosted by the Alice Springs Town Council were disappointed but understanding with the decision to cancel day one of the classic outback trial due to impassable road conditions. 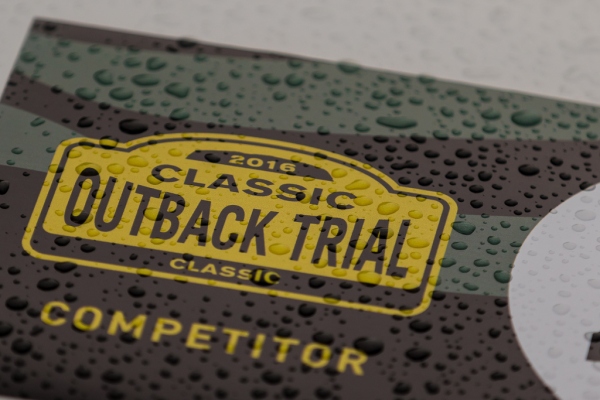 This great pic by COT photographer, Craig O’Brien, sums up the past few days…

Alice Springs was turned white on Friday afternoon with the tonnes of hail that was dumped when two violent storms swept in, along with over 60 mm of rain. That left the Todd River in flood, cut roads and flooded many houses and businesses in the town centre. A massive clean up is still underway to remove trees and tree branches from houses, cars and roads.

At the function in the Alice Springs Civic Centre, Town Crier Meredith Campbell announced Councillor Brendan Heenan who welcomed the Rally teams, making the link to the first RedeX Around Australia Trial in 1953 that passed through Alice Springs.

Event Director Phillip Bernadou publicly thanked the Alice spings Town council and the many arms of the N.T. government for their co-operation and support for the Classic Outback Trial. He made mention of the 4 international teams that have travelled to Alice Springs to take part. He also gave special thanks to the Pastoralists for welcoming the event on to their properties.

The formalities concluded with a short introduction to the event’s charity partner White Ribbon by Graham Pearce, a 30 year veteran of Correctional Services in S.A. and the N.T. and for the last 5 years, an ambassador for White Ribbon. He explained that White Ribbon is a male led campaign to end Men’s violence towards Women. At the heart of Graham’s message was that Men should be part of the solution to the problem.

Afterwards, the rally teams were generally philosophical about the loss of a day’s competition.

Pat Cole, driver of a 1969 Mercedes 280SL that has competed in more than 50 international rallies all over the world reflected tonight. “Rallying always throws you a curve ball and this one’s done it on the first day.”

Ted Perkins, driving a 1966 Lotus Cortina said that he “would rather have a day off than spend the day digging the car out of bogs and I’m sure 110 % of the competitors would say the same.” Ted added that “he feels for the organizers that have spent 2 years planning the event, but that’s it, ‘Force-Majeur’”.

The cancellation of the first days stages means crews have an extra day to prepare their cars and do final checks on fuel consumption and spares inventory. It also means they have a day to enjoy Alice Springs and surrounds as well as the Lasseters entertainment complex. “Regrettable though it is, it is a great place for a day off.” observed a philosophical event director, Phillip Bernadou.

The 2016 Classic outback Trial has attracted 52 rally crews in classic rally cars like Ford Mustangs, Porsche’s and Datsun 260Z’s, including 4 cars and crews from overseas. Each rally crew will have the support of one or more service crews and the event itself will bring about 50 officials in from all over Australia. In total, at least 350 people associated with the Classic Outback Trial will be in Alice Springs for over a week.

The event runs from June 18 to 24 and starts and finishes each day at Lasseters in Alice Springs.