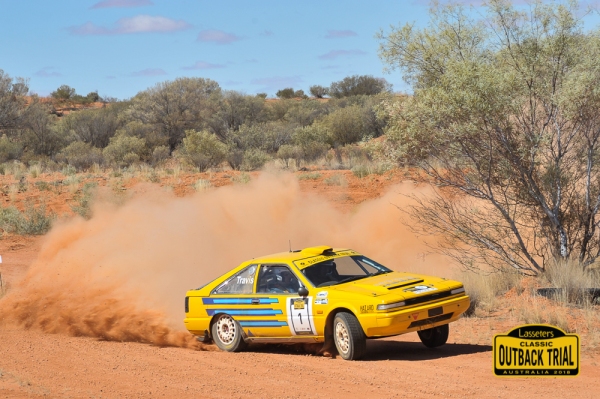 Can the Travis pair make it three in a row? Photo: Ian Smith

Andrew and David Travis head into the final day of the Lasseters Classic Outback Trial with a lead of more than nine minutes, after dominating the final three stages of day six.

The penultimate day of the event was set to be the toughest with six stages and 175 competitive kilometers to be covered including a repeat of Tuesday’s tests through the sand dunes near Rainbow Valley. The second placed Tuthill Porsche of Joost Van Cauwenberge and Jacques Castelein went fastest on SS26 Owen Springs Long Reverse, just pipping the Mazda RX7 of Adam Kaplan and Aleisha Penney.

Kaplan/Penney took the honours in the next two stages before stopping half way through SS29 Whitewood with a broken axle and CV joint. The Leyland P76 of Michael and Justin Coates would also encounter mechanical issues with a gearbox change required at the major service. Their dramas elevated the Scouts NT entry of Bryce Fullwood and Lachlan Casburn (Datsun) to a sensational fifth in Classic Competition.

The Travis duo took their first stage win in almost three days when they went fastest on SS29 and followed this up with wins on the last two stages of the day. Having extended their advantage over the Porsche to nine minutes, and with only 76km left on day 7, they are remarkably on the verge of winning their third consecutive Classic Outback Trial.

While the Travis pair cemented their position at the top of the Classic standings, day six was a disaster for Modern Competition leaders Chris and Blake McCormack when their Magna blew a clutch 10km into the day’s opening stage. The team have repaired the car and will rejoin tomorrow but any hopes of victory have evaporated. With a lead of more than 90 minutes Peter Neal and Craig Whyburn are set to repeat their 2016 class win.