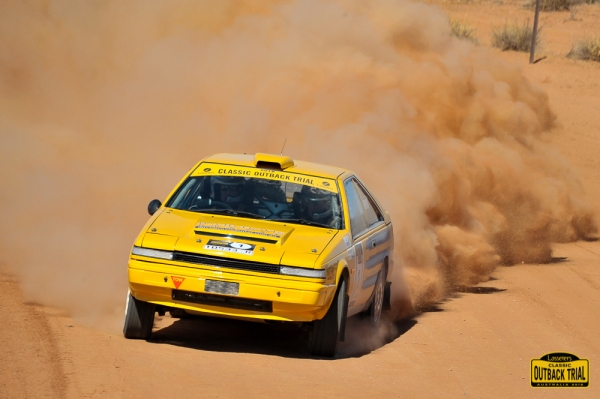 Andrew and David Travis on their way to winning the prologue stage. Photo: Ian Smith

Three-time winners and defending Classic Class champions Andrew and David Travis have kicked off their 2018 Classic Outback Trial by going fastest on the 13km prologue stage in their V6 powered Nissan Gazelle.

Following the ceremonial start of the event at Lasseters in Alice Springs, in the basking sun and under clear blue skies the field of 38 competitors set off for the prologue in their machines at the Finke facility just outside of town. The Travis’ set the benchmark in 2016 and have displayed no signs of slowing down as they set the fastest time, 20 seconds clear of the Viking Motorsport Escort of Jorge Perez Companc/Jose Volta. A mere nine seconds covered the next five cars.

The MV Solar entry of Michael Valentine and co-driver Jason Fraser were spectacular at the Finke track, throwing around their Datsun to finish seventh, a fine achievement after a tireless three weeks rebuilding their car after rolling it at the recent Buladelah Rally. Belgian pair Joost Van Cauwenberge and Jacques Castelein (Porsche) were eighth, with Shane Atwell/David Moir (Falcon) and Ian Swan/Val Swan (Volvo) rounding out the top 10.

With the prologue complete, the action heats up today with the first day of competition which will see teams covering five stages and 117 testing kilometres to the south of Alice Springs.

Results for the event can be found at: http://www.rallyresults.com.au/cot/results2018/